The most important part of Norsk Tipping’s threefold social mission is the task of preventing gambling problems developing among the general public.

The regulated and controlled gaming environment offered by the company is intended to satisfy the desire to gamble in the Norwegian market and channel players away from the illegal, unregulated market to Norsk Tipping to mitigate risk. Figures and statistics concerning market developments suggest that the company is good at this and is able to channel players (number) and the desire to gamble (shares) to a responsible environment. Besides Norsk Tipping’s tools and means, both the Norwegian Gaming and Foundation Authority and the Ministry of Culture have implemented important risk mitigation measures to curb the opportunities open to online gaming operators that are not permitted to sell gaming in Norway.

Most of the growth in the number of red players in the last two years was in game categories where the strongest competition is from gaming operators that are not permitted to offer games in Norway. The risk of developing gambling problems is also the highest in these games categories. If the company is able to capture greater market shares in these games, the number of players deemed to be at risk is expected to rise for a while because of the increased channelling. It is therefore important that the company continues to focus on risk mitigating means and measures.

The index that measures gaming behaviour (the Playscan index) confirms that Norsk Tipping has managed to slow the red trend from 2018 to 2019, and that the responsibility measures are working as intended.

Norsk Tipping is constantly developing and implementing new responsibility measures based on how the players’ behaviour develops. In 2019, three important, risk mitigating measures were launched as new elements of the responsibility framework (together with all of the other elements):

Preventing large prizes being gambled away (winnings go directly into a bank account)
Personal gaming accounts
One-time passwords being sent to a registered mobile phone number for logging in to Multix/Belago. 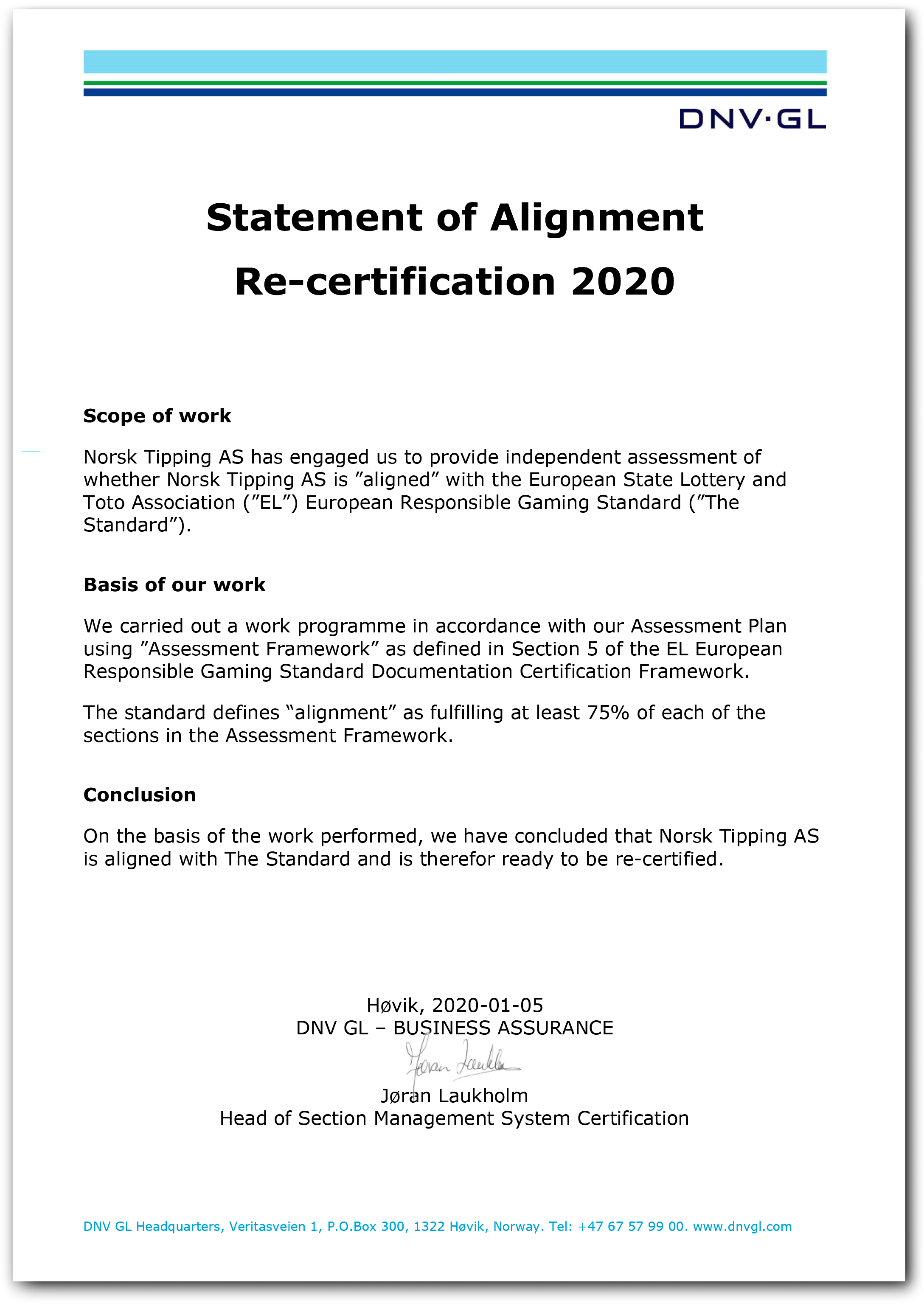 Norsk Tipping is certified in accordance with European Lotteries’ European Responsible Gaming Standards. Recertification takes place every three years and the company must undergo an audit in relation to the standard once during the intervening period in order to maintain its certified status. Norsk Tipping was recertified in 2019. The process is based on information about the games, game development, interviews (internal and external), measures and submitted documentation of all eleven areas defined in the standard, and is intended to determine how well the responsibility work has been anchored and operationalised throughout the company.

For the first time ever, Norsk Tipping hit the jackpot with a score of 100 per cent goal attainment in eleven out of eleven areas, and 1,100 points out of a possible 1,100 points. This is important recognition of the work Norsk Tipping is doing within responsible gaming activities.

Norsk Tipping uses the Playscan analysis tool to make players’ aware of their own gaming behaviour. The tool links a customer’s gaming data to self-reporting (self-testing) to provide as correct a risk analysis as possible.

Playscan is one of Norsk Tipping’s most important tools for preventing gambling problems. The tool enables the company to identify players who are exhibiting signs of risk behaviours and, for example, ensure that these players do not receive live marketing. Many of them also receive ‘the other type of call from Hamar’.

Move the cursor around the figure to see detailed information.

Playscan is a third-party analysis tool that measures changes in gaming behaviour in terms of the risk of developing a gambling problem. The solution is objective and based on current research into identifying risk and quantifying likely personal risk levels through data, behaviour, and self-reporting.

Norsk Tipping has designated the Playscan index an indicator (one of several such established indicators) of how well the company is doing in preventing gambling problems. The index measures status changes and movements between Playscan’s levels of probable risk (e.g. yellow to red status). All positive changes (i.e. movements in the direction of green) score plus points, while all negative changes (movements in the direction of red) score minus points, as shown in the figure below.

The Playscan index for 2019 was -4,358, compared with -10,806 in 2018, which indicates a clear improvement and a change in the right direction. A negative value is generally not a desirable result, but some of the movement is assumed to be due to Norsk Tipping having increased its attractiveness and the company being more successful at channelling players and their desire to gamble.

Meanwhile, the change from 2018 to 2019 is a clear indication that, overall, both the new and the established responsibility measures are having the desired risk mitigating effect.

In 2017, Norsk Tipping signed a four-year agreement for commissioned research into responsible gaming activities and preventing gambling problems with Nottingham Trent University in the UK. The research is headed by a renowned researcher, Professor Mark Griffiths. The agreement has a budget of NOK 4-8 million over four years.

In 2019, the researchers focused on Multix and Belago. Norsk Tipping wanted to strengthen research in this area in order to gain new insights in a year when there was a lot of focus on gaming terminals in connection with both the procurement of new terminals and the introduction of a new logging in solution for Multix and Belago.

The three topics that researchers have looked at are:
• The effects of the mandatory break after 60 minutes of play
The study provided no clear conclusions concerning the question of whether a mandatory break has an effect or not. It became clear that an experimental study will have to be set up in order to determine the effects of mandatory breaks. Norsk Tipping is in the process of doing this.

• Social facilitation. Can you tell if players behave differently if there are many other players around a player in the same venue?
The main finding was that if multiple players are together in the same venue, the likelihood of them spending more time and money increases.

• Predicting voluntary limit setting. Research was carried out into whether it is possible to predict whether a player would raise or lower their limits based on gaming behaviour.
The results support the idea that it is possible to do this using machine learning algorithms. This is something that can be used in future responsibility measures.

In 2020, the research project’s main focus will be on looking at the effect different mandatory break options have on instant games players. The project has been set up as an experimental study and is the first of its kind in the world.

One important task in the work on responsible gaming is providing all employees of Norsk Tipping with information and training on the subject. The training is intended to ensure that employees have the skills they need to perform their tasks. If the company is to help reduce the risk of employees developing gambling problems, it is very important for it to provide good information and training. The company must provide information about the signs to look out for if you are concerned a colleague may have a gambling problem.

A new version of the basic course in responsible gaming activities was published in the company’s training portal, Tippeskolen, in the autumn of 2018. The course is compulsory and has been completed by almost 100 per cent of the employees.

The company particularly emphasises training and skills development in units and disciplines with tasks within customer contact, sales/marketing, and product development.

All new employees must complete an induction programme, which has a heavy emphasis the company’s role and mission. Norsk Tipping’s management and board use internal communication channels to emphasise the importance of the company’s responsibility work.

The company has received feedback from a number of external responsibility audits stating that the culture of responsibility and the company’s mission are well established among all of its employees.

Norsk Tipping’s online responsibility portal contains general and relevant preventive information about gaming/gambling problems, services such as gaming limits, breaks/exclusions, own risk profile (Playscan) and gaming accounts. It also has contact information for the Helpline and other experts from whom you can seek help.

Once again, online casino gaming dominated the calls to the Helpline in 2019.

The Helpline uses the results from first-time calls to obtain as accurate a picture as possible of which games are causing their callers problems. This ensures the same player is not counted multiple times. Some callers also say they are experiencing problems because of more than one game.

Overall, the number of first-time callers fell from 534 calls in 2018 to 506 calls in 2019. A positive trend can also be detected in relation to what has been the main problem in recent years: online casino games. Here, the number of calls fell from 286 in 2018 to 232 in 2019. This may indicate that a number of responsibility measures in the regulated gaming environment are starting to have an effect and that the trend of an increasing number of calls each year has been reversed.

A fall in calls relating to a competitive category like online casino gaming goes a long way to confirming that the regulatory measures the Norwegian Gaming and Foundation Authority has implemented in recent years have had an effect.

The unregulated online gaming environment, which accounts for an estimated 14-per cent market share of the total gaming market in Norway, was responsible for a substantial proportion of the total number of calls the Helpline gets. For example, just 5 per cent of calls related to online casinos only mentioned Norsk Tipping, which means that the illegal gaming environment was mentioned in no less than 95 per cent of all calls relating to this category.

20 per cent of all calls to the Helpline specified betting games as the main problem game (3 per cent Live Odds) and of these, 27 per cent of the players mentioned Norsk Tipping.

Poker was mentioned as the main problem game by 10 per cent of callers in the statistics for 2019. This is a cause for concern given that there is no legal, regulated gaming environment for poker except for games involving very limited stakes per player in private homes.